Prostate Specific Antigen (PSA): A blood test that measures a protein manufactured solely by prostate cells. A raised reading indicates an abnormal condition of the prostate, either benign or malignant. It is currently the most sensitive marker for the identification and monitoring of prostate cancer cells.

Make sure that you obtain a copy of the results (a PSA figure) and do not accept merely being told it is “satisfactory”. Record your results and draw them to your GP’s attention if succeeding results increase year on year. 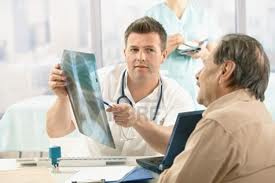 PSA levels often increase with age because of benign growth of the prostate BPH and this increases with age and so the referral values for PSA are age related.

Benign growth of the prostate causes a slow steady increase in PSA levels. However, prostate cancer can cause a much faster increase, depending on its aggressiveness. Therefore, it is also important that both you and your GP monitor the rate of change of PSA levels.

At the same time your doctor will usually carry out a Digital Rectal Examination (DRE). For this procedure the physician inserts a gloved, lubricated finger into the rectum to feel the outside of the prostate gland for signs of cancer. Unfortunately, many early prostate cancers cannot be detected by DRE.

Unlike many countries in Europe, there is no UK prostate screening programme. In France, for example, all men over 50 are tested annually.

Prospect supports screening for prostate cancer in the UK

But the Department of Health has established a Prostate Cancer Management Programme to help men decide to have a PSA test or not. See. You can ask your GP for information about the advantages and disadvantages of the test and if you want one you can ask your GP for one. You are entitled to have a PSA test if you are over 50, or if you have an increased risk of prostate cancer. In the UK, the official argument is that “To date there is no good evidence to say whether or not screening healthy asymptomatic men would reduce mortality from prostate cancer”. And in March ’18, a new Cancer Research UK-funded study claimed to shed more light on how unreliable the test is. It confirmed that for men without symptoms, the PSA test doesnŌĆÖt save lives see. However, in our view, screening would result in earlier diagnosis, and earlier treatment of cancers is more likely to be successful.┬ĀAnd a new analysis of existing clinical trial evidence has found that lives are saved when men aged 55-70 have a PSA test. The authors of the US study concluded that screening these men ŌĆ£can signi’¼ücantly reduce the risk for prostate cancer deathŌĆØ (Sept ŌĆÖ17). See. And backing for the PSA test came from Dr Tom Stuttaford in The Oldie magazine In July ’18 shortly before his death. He said it was ŌĆ£absolute nonsenseŌĆØ to suggest – ŌĆ£as some civil servants have recently – that the PSA test is absolutely useless. Nonsense. The single test has a limited use: men need regular PSA testing. It is life-saving. Soon we hope a better test will evolve, so that a dangerous tumour will be detected early and treated effectivelyŌĆØ.

If PSA levels are very high then this is strongly indicative of prostate cancer. The position is not so clear when the PSA is only mildly raised, because PSA readings can vary from day to day or week to week. With regular PSA tests a patient and his doctor can tell what is happening. A test that reveals a sudden rise from a low level (3 or 4) can be repeated six weeks later before resorting to a biopsy. This rate of change (or acceleration) is acknowledged by researchers as being a guide to the presence of multiplying cancerous prostate cells.

Prostate cancer is a major cause of mortality today and men should not allow themselves to be dissuaded from taking it seriously.

Some GPs refuse to give PSA tests to men who do not have symptoms. Our experience is that this can extend to reluctance to giving PSA tests to men with symptoms. This can often lead to a delay of years between the initial symptoms and the diagnosis of cancer.┬ĀFor authoritative updates on the latest screening research see ERSPC